How to build a garden 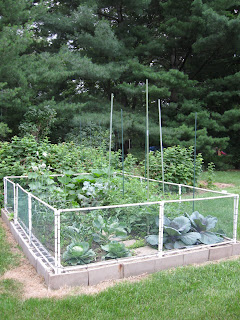 Outside diameter of the garden is approximately 12 ft x 8 ft.  Planting space is approximately 11 ft x 7 ft.  We used the cinder blocks (ugly, but functional, and not too noticeable from the house) for cost and expediency.  I wanted to get the garden planted and didn’t want to spend time building something from wood.  Also didn’t want to use treated lumber.  When we did the blocks we thought that we’d replace the blocks “next year” but 5 years later have decided it works fine the way it is.  The holes in the blocks are filled with pea-gravel.  Originally planting herbs and flowers in the holes, but that interfered with the fencing.  The pea gravel helps keep the fence posts in place.  You have to fill them with something so the critters can’t get in to the garden area. 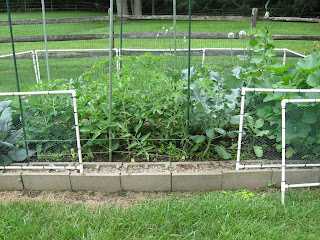 The real beauty of this system is the removable fencing.   Each panel is approximately 4 feet long and 25” high.  (This was determined by the height of the chicken wire.) The tubes are ½” PVC pipe and the fencing part is a metal chicken wire held on to the vertical pipes with cable ties.  We tried plastic chicken ‘wire’ but the woodchuck ate through it. 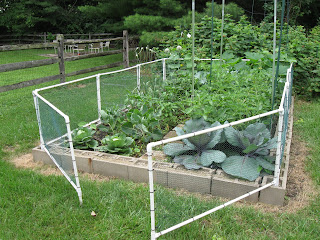 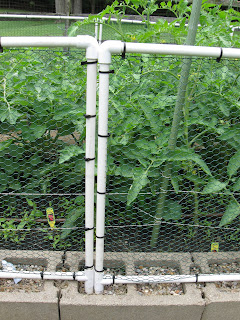 Below shows the bottom of the fencing.  There’s a larger diameter tube set in the pea-gravel that the end of the fence telescopes in to.  You can’t fill the cinder block holes to the top because then the gravel falls in the tube. 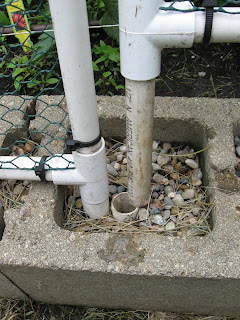 Below you can see a close up of the tubing, wire, and cable ties. 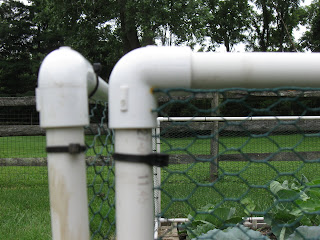 As far as filling the raised bed with soil, I laid a double layer of newspaper on the lawn before placing the cinder blocks down.  I wet the newspaper, then filled it with lots and lots of "Mel's Mix".  You can find the recipe at http://www.squarefootgardening.org.  I mixed the ingredients on a large tarp before dumping them into the raised bed.  I watered the soil as I added it to the garden. I added a row of 12" paving blocks down the middle of the garden to allow access to all plants.
I roughly adhere to the Square Foot method of gardening.  In my little garden this year I have 2 zucchini plants, 2 pickling cucumber plants, 2 slicing cucumber plants, a dozen leeks, a couple dozen onions, a dozen or so garlic plants, 4 celery plants, numerous green bean plants, 4 broccoli plants, 2 brussels sprouts plants, 2 green cabbages, 2 red cabbages, 7 peppers (bell, anaheim, jalepeno), 8 tomato plants (rutgers, roma, early girl), 1 watermelon plant and some zinnias.  Radishes and lettuce are done. That's a lot crammed into a little space, but it works year after year.  I do rotate my crops, never growing things in the same place 2 years in a row.  I have carrots and cherry tomatoes growing in containers near the house, and a wonderful herb spiral, too.  (It's grown up a lot--this photo is from May.) 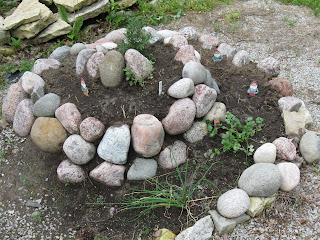